The stage was first taken by Strange Talk, the energetic four-piece hailing from Melbourne quickly helping the audience to leave behind memories of the cold night air as they packed into the venue. They played with excitement and energy, covering No Doubt’s “Hella Good” with zeal and warranting cheers for a brilliant rendition of their own “Climbing Walls”.

As they exited the stage the air was thick with anticipation, the audience watching as crew tweaked the rigging in place for Art vs. Science’ infamous light effects, renown as being a show within themselves. From the audience pit the set up looked extravagant and excitement built as hundreds of fans vied for top viewing position, trying to spy the musicians appearing in the wings.

The wait was not long before the lights dimmed and Art vs. Science took the stage. Beginning with new hit “A.I.M Fire!”, the boys had the audience in hand from the word go. Smashing through new and old hits “Bumblebee”, “Higher”, “Friend in the Field” and “Magic Fountain” they seemed to leach energy from the manic crowd. Brilliant laser light beams wowed the audience, the technical aspects of the show as top notch as the music. While the musicians’ showmanship entranced them the crowd grew hoarse from cheers and shouted lyrics, the room heating up as hundreds of bodies danced and jumped as one.

Reaching “Parlez-Vous Francais?” in the set list, the crowd knew something special was afoot as Dan Mac left the keyboard and donned his electric guitar, then leapt from the stage and into the throng of cheering fans. Appearing in sudden spotlights on the edges of The Tivoli’s balconies and bursting out from within the crowd to perform dazzling solos, Mac played with frenzied enthusiasm. It was hard to tell who between the audience and the band were enjoying themselves more.

All too soon Art vs. Science announced their final song for the tour, and while the band members pretended to cry over keyboards, the audience showed their appreciation for a brilliant performance. Finishing with a tight and loud rendition of “Hollywood”, the three musicians took a well deserved bow, deafening cheers from the audience echoing out long after they had left the stage.

Yet again, Art vs. Science had proven that the experience of seeing them perform live is one not to be missed. Definitely one of the Australian live acts of the moment, this Art vs. Science is and has something special.

– The Experiment – Art vs Science 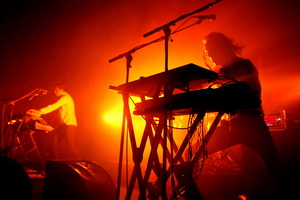