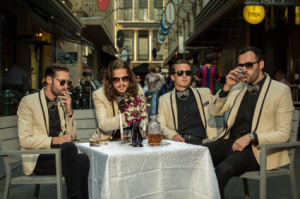 There was a rum bar in Puerto Rico that opened up inside the evacuated bowels of a disused swimming pool in 1967. Its muddied blue walls were filled with itinerate journalists, ruthless neighborhood loan sharks, even more ruthless Texan property developers, 14 different kinds of rum and dropouts from every civilized corner of the globe.

They were strung along the bar, drinking their way into different lives, or throwing their bodies over the spilt liquor and broken glass spread across the dance floor. This subterranean bar didn’t rattle with salsa, calypso and meringue like the other bars, it howled and moaned with rock and roll. It was a hellish heaven.

As they celebrate the release of their debut self titled album this June All the Colours invite you to come dressed as this bar’s lost clientele – its failed businessmen and fleeing expatriates, its unseemly dilettantes, its exotic drifters and high-end sharks.

…and the Soundtrack? A Nu disco remix of the album opener SHAME. The ‘That’s Nice’ remix is the result of a chance meeting between Josh Moriarty and Mexican producer Mario Rdz while Josh was touring with Miami Horror…