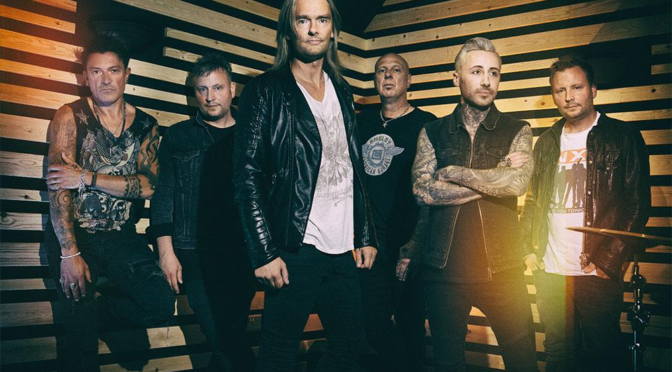 VEGA have been a favourite of mine for a while now, having picked up their first album Kiss of Life around 10 years ago, and also having known singer Nick Workman from his previous band Kick.  Always melodic, with a touch of nu-metal edge that set them a little apart from the crowd, Anarchy & Unity is their seventh album release following up from Grit Your Teeth from early 2020, and the new record is very much in the same vein, but perhaps with an added maturity and bite.

A couple of line-up changes since the last record, with Pete Newdeck (Midnite City) providing the power behind the kit, and Billy Taylor (ex-Inglorious) on guitars has seen a more group-focussed songwriting approach according to Nick : “The songs started like all Vega songs, with myself, Tom, and James writing and recording. Then Billy and Pete came along and for the first time we had everyone in the band getting involved in the songwriting. The songs Tom, James and I wrote were still there, but now with a steroid injection and production touches that just took them to new levels.  Everyone had such a vital part to play on this album which is why every song is written, performed and produced by Vega.  As always, we had no agenda when writing, we just wrote as and when the moment took us.  However, we wanted the album to have a really solid, in your face sound that you can feel pumping in your chest,”

Heavy Melodic Rock is what you get with Vega, and this means big chunky riffs and lead breaks from the twin guitars, solid bass and drums, with the added layers of keyboards, along with lots of harmony vocals, and the new album delivers all of this with a bit more of the attitude and punch that came to the fore with Grit Your Teeth.  Beautiful Lie and Sooner or Later open the album with a double-shot of powerful melodic rock, before a more atmospheric keyboard-driven intro to End Of The Fade leads into a slower-tempo number, not quite a ballad, with Nick really stretching his range from the lower-register verses up through the pre-chorus, and all the way up into the soaring chorus melodies.  There are some other quirky little segments in the track, which is part of the unique sound the band has developed, and these show off the added dimensions which set Vega apart from a number of their contemporaries.

The pace picks up a bit with Ain’t Who I Am, which has a darker tone to the guitar sound, supplemented by some droning keys, and another tour-de-force vocal performance from Nick.   The closest thing to an AOR ballad so far is Welcome to Wherever, a glorious example of melodic pomp rock – bridging the years between Icon’s classic Night of The Crime, and the current likes of W.E.T. and Eclipse – towering guitars, orchestral keyboards and soaring guitar solos all blended into one.

A bit of menace in the vocals, over the frenetic punch of Bring The Riot – an absolute belter of an edgy rocker, with Tom Martin on bass and Pete laying down a crushing beat with some really crisp drumming while the two guitars smash out the riffs.  The chorus is catchy as all hell, and the solo, coming after the quieter middle-eight, like many from Thurston, is nice and crisp, but delivers an extra blast of turbo over the underlying riff.

The first half of Live For Me is straight out of the Bad English school of monster-ballads, and has the Vega sound all over it, with one of those unusual melodies in the verse, and this morphs into the huge chorus with all the layers of backing harmonies.  Then the guitars kick in, followed by Newdeck with a cracker of a drum pattern leading into the superb solo – a long one for a Vega solo, but worth every second.  The intensity increases through the latter choruses, and takes us through to a corker of an ending, all keyboards and brutal riffs combined.

James Martin’s piano is something of the hero of Kneel To You, which has a bit of a rock-operatic feel, that is reinforced by the Brian May-like guitar harmonies through the solo, and the vocal interlude that follows the solo and precedes the crescendo into the final couple of choruses, with some superb vocals in particular.  Glow is Vega at their catchiest best, with an ear-worm of a guitar lick, a straight-ahead verse and another monster chorus.

The odd track of the bunch is the cracking C’Mon which has a 50’s vibe to the stripped-down verse, and then a hook-filled groove to the chorus, another ripper of a solo and more glorious choral harmonies, all creamed in to under 3 minutes of joy!  Had Enough kicks off with the keys and guitars setting the tone early, and more layers of harmonies in the backing vocals, all reinforced by the slabs of keyboards that give such texture to the Vega sound, leading into a key solo before the lightning-fast dexterity of the guitar solo.

The album closes with another riff-fest in 2Die4, underpinned by the solidity of the rhythm section, the cathedral-like sound from the keyboards and vocals, and one last cracker of a solo, before the final 30 seconds with Newdeck pummelling the kit while the guitars weave a wild pattern through to the final sudden stop.

The album is available to pre-order from and www.vegaofficial.co.uk
or
https://orcd.co/vega