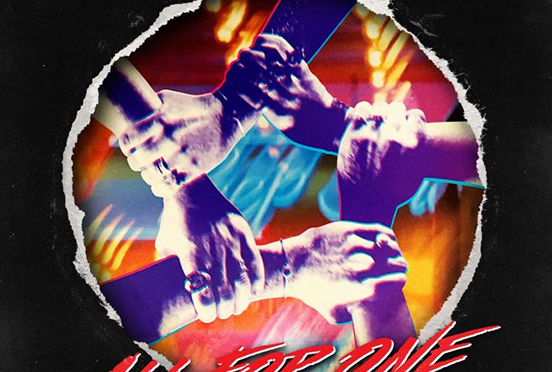 SCREAMING JETS – ALL FOR ONE
(30th Anniversary)

In 1990 five blokes from Newcastle called The Screaming Jets took the Aussie music scene by the scruff of the neck and gave a red-hot shake.

Before they had even signed their first record deal with rooArt Records, the band had already clocked up more than 200 live shows, won the Triple J Battle Of The Bands competition and established themselves as an onstage, no holds barred, powerhouse of Aussie rock n roll.

In 1991 they released their debut album All For One, which peaked at #2 on the ARIA charts. The second single from the album, Better was the song that introduced the band to the world, and saw The Screaming Jets embark on their first world tour – to Europe, UK, USA and Canada.

Flash forward to 2021 and as a 30th year anniversary celebration, and a tip of the hat to where it all began, the current line-up, with only Dave Gleeson and Paul Woseen from the first time around, has rerecorded the All For One album with a fresh new take. Overseen by original producer, Steve James, the album has been repackaged with new artwork with a clear reference to the original.

Some will ask Why? This was a ground-breaking debut at that specific time in 1991 when the music world was changing and pub-rock was on the way out.  The band has gone through a few line-up changes, and more drummers than Spinal Tap, but the core line-up has been playing a lot of these tracks on stage for the past 10 years and more, and in a few cases the tracks have developed and matured the more they have been played.  Maybe it would be have been better to have done a very specific live show and recorded the set in the album order as a live version?

Some of the tracks have been “refreshed” more than the others, and Jimi Hocking and Scott Kingman have taken a few more liberties with the guitar breaks, as is clear from the rip-snorting opening track of C’Mon which still hits the spot!  Some of the less familiar tracks like No Point and Starting Out serve to date the record a bit, and while Gleeso’s voice has weathered pretty well with maturity, the band has taken the opportunity to upgrade the backing vocals, and Paul Woseen remains on top form there.

Better will always be the signature track, and one of the greatest Aussie rock tracks ever, with the tempo and time changes, the power-chords and the beat that just forces the crowd to bounce around.  This version has a bit more warmth and beef in the guitars, and will for ever remain a staple of the live set.  There is a fierce energy to Needle and Shine On has been softened and slowed down to the stripped back blues number we now hear live, with a nice separation in the production that allows all the band members to be heard.

The guitarists had some fun with the riffs in Stop The World and Cam McGlinchey excels on the drums with those monster-sounding tom fills that power the track along.  Blue Sashes has also had the guitar-makeover which really adds something to the mid-section.  Gleeso manages the light and shade of the lead vocal well, and really lets rip in the chorus.

There is an obvious musical reference to the band’s idols AC/DC in the riffs to Sister Tease, and the less said about the lyrics the better.  McGlinchey does a great job on the kit though, and the solos and lead breaks are terrific, and the accents and time-changes in the back end of the track are still powerful.  FRC contains the now-obligatory language warning up front – this may have been the voice of rebellious youth at the time, but now just seems crude.  The message may still be relevant, and 80% of the song is a catchy rocker with a great chorus.

Got It appears as disorganised as the original, and must be hard to keep the tempo, but the chorus has refreshed the youthful arrogance of this young bunch of scruffs from Newie, with the line “You Either Got It or You Ain’t” delivered with Gleeso’s trademark cocky grin.

The album ends with the pop-rock of The Only One, and it is a good reminder of what the Jets do best – when they lift themselves up from the pub-rock floor and add their pretty unique touches to the genre, they take it all up a level.  This may of course be part of the reason the guys are still pounding the boards 30 years later, and still draw the crowds.

Whatever the thoughts are as to the merits of re-recording the record, and there will certainly be plenty of purists making that point, in the words of Dave Gleeson; “It’s nice to revisit some of those songs. A bunch of them we still play live to this day, but during the re-recording of some of the songs we haven’t done for a while…wow, the memories just come flooding back and hopefully it’ll be the same for our loyal fans. This tour may even bring people out who haven’t seen us for a while. Maybe there will be people there to judge whether we are the same as 30 years ago. Maybe they’ll think we are better. We haven’t toured together for 18 months – so it’ll be like a rebirth…which could get messy!”

The Screaming Jets are:

All For One 30 Year Anniversary Edition is out now!