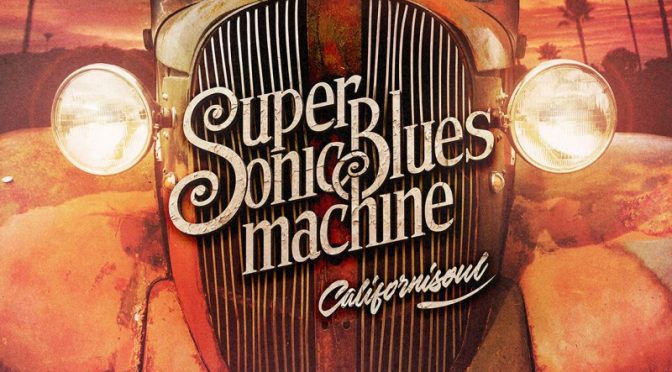 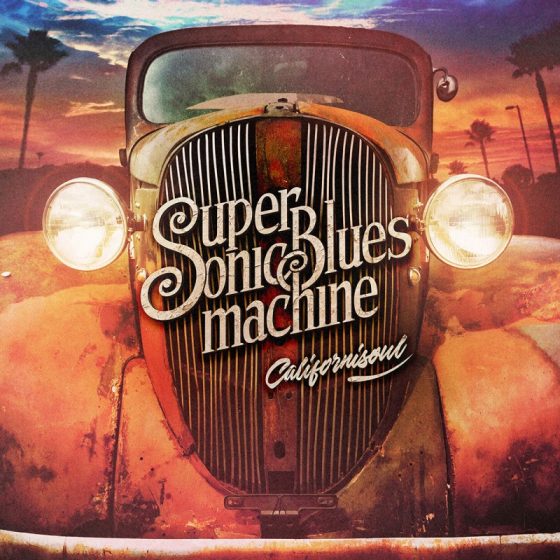 This is the second album release for the blues rock collective that is Supersonic Blues Machine – three great and well-respected musicians at the core of the band in Fabrizio Grossi (Bass), Kenny Aronoff (Drums) and Lance Lopez (Vocals / Guitar), and a bunch of “friends” guesting on the album and at the live shows the band gets to play.

Lopez is from the Stevie Ray Vaughan school of Texan blues guitarists, with a background playing with the likes of Johnnie Taylor, Lucky Peterson and Buddy Miles, before he recorded his first solo album in 2010, Salvation From Sundown (produced by legend Jim Gaines) – which was followed up by Handmade Music the following year. Both albums demonstrate the songwriting craft and searing blues guitar work of this somewhat unsung talent.

Bassman Grossi is a well known A&R man and producer (Joe Bonamassa, Alice Cooper, Dava Navarro and Ice T to name just a few) who accidentally ended up playing bass with the likes of Nina Hagen and Steve Vai, as well as doing work with Neal Schon, Slash, Tina Arena and even Cypress Hill. He hooked up with Lopez in 2012 which resulted in three songs being pulled together in the studio, becoming the foundation for this new project, before they knew it themselves.

One of my influences as a drummer in the 1980’s and 1990’s, Kenny Aronoff is most famous for being drummer for John Fogerty and John Cougar Mellencamp for more than 20 years, but he kept cropping up on albums from Bob Seger, Melissa Etheridge, Meat Loaf’s Bat Out Of Hell II, and Cinderella’s fourth album Still Climbing. One of the most in demand session and live drummers of the last 20 years, he met the other pair through Steve Lukather…..and so the Supersonic Blues Machine was born.

Debut album West of Flushing, South of Frisco was released in February 2016 (Provogue Records), and with the collection of guest players including Billy Gibbons, Eric Gales, Robben Ford and Walter Trout, this got a fair amount of attention, and led to the band playing through the USA, Europe and even in Russia on the festival circuit. Described by Classic Rock Magazine as “A nasty, down and dirty blues album that reminds you of every fantastic dive bar you’ve ever visited to cry in your whiskey about that long lost girlfriend!” the album was chock full of great songs, and the terrific performances of the band and their friends.

Roll on twelve months, and the three get back together with a bunch more songs mainly written by Grossi, and fleshed out in the studio by the band, and Californisoul continues the soulful blues rock journey from the first record, taking an imaginary 1970’s road trip up the California coast as the inspiration, and this feel really shines through the whole album from start to finish. The guests are back in force, with Steve Lukather adding his licks to the repeat offenders in Gibbons, Ford, Trout and Gales. The artists include Alessandro Alessandroni Jr on keyboards, and some great backing vocals from Andrea and Francis Benitez Grossi.

So fire up the V8, pull down the ragtop, and turn up the 8-track for drive up the coast, kicking off with the funky reggae shuffle of I Am Done Missing You, an anthem for spurned lovers with some tasty slide guitar from Lopez and the immediate introduction of the backing vocal choral style that crops up throughout the album. Shades of 10CC’s Dreadlock Holiday twinned with the throaty emotion of Lopez singing, and the blues and slide guitar breaks.

Somebody’s Fool kicks off with that classic Texas swampy blues riff grooving straight from the Lopez playbook, with the slide guitar from Lopez being beautifully complemented by some silky-smooth playing from Robben Ford, and some extra atmosphere being created by the backing vocals. The twin solo from Lopez on slide and Ford on standard is outstanding, and the closing minute is a melange of the funky blues riff, the girls backing vocals and the jazzy drums that you can imagine building as a live song into an extended workout.

A neat little drum fill leads into L.O.V.E. which has that 1970’s Sly & The Family Stone feel, with the drums all slightly behind the beat, with harmonica and piano all over the superb vocal line getting rowdier as the song progresses. A grumbling mumble and some distortion opens up the Billy Gibbons track Broken Heart with a southern boogie riff that could easily be from a ZZ Top record until the key change in the middle eight which picks up the energy driven by Aronoff behind the kit as he rocks into double-time while the two guitarists trade licks to fade. A switch back to the Texas blues rock with Bad Boys that features a tasty little riff from Lopez and more of those backing vocals through the chorus – the more times you listen to this one, the more licks you pick up in the background. It has a tinge of the Electric Boys funk in there, and you can see why Grossi has worked so much with George Clinton and other non-rock artists.

Elevate is just a cracking track, with Eric Gales blowing off the cobwebs in tandem with Grossi smashing it on the bass, and some great keyboards behind the riff that then surprisingly flips into a slow-burning gospel anthem. A more latin-feel to The One that would hold a place on an early Santana album – plenty of cowbell and samba-style percussion throughout, and a smooth vocal delivery and blistering guitar solo from Lopez – whose talents are clearly on show. A similar feel in the opening to Hard Times with Hammond organ underpinning the guitar melodies, and a very retro feel to the chorus that reminds of Tommy Bolin era Deep Purple, albeit with a very different feel to the guitar work from the two as they duel head-to- head over the driving bass and drums, until the band takes something of a back seat and lets Lukather and Lopez trade some blistering solo lines.

In a three-piece band where the lead guitarist is also the singer, it is easy to focus on that one person, and it is fair to say that the bass and drums throughout the record remain slightly understated, not to diminish their impact at all, but it is Lance Lopez who is the revelation here, with his vocals dripping with pure soul emotion as well as fitting the blues style perfectly. Cry maybe the least immediate track on the record, being a slow melodious soul number, but that is what brings home the multiple talents of the frontman.

A standout track is The Stranger which is a more mainstream blues rocker, but which has the tell-tale markings of the SBM production style all over it, and Grossi is clearly dishing out some pretty funky basslines underneath the riff, and a guitar solo that uses that voicebox effect so common back in the 1980s. The final guest is one of my recent finds (being slower than most) Walter Trout who lends his impassioned guitar work to What’s Wrong which clearly represents the late night drinks in the bar at the end of the long drive up the California coast. Most similar in style to Lopez, the two of them play off each other throughout as they swap lead breaks and solos through the 6 minute album closer.

Kenny Aronoff has cemented himself in my book as an effortlessly wonderful drummer through this record, taking a back-seat for most of the songs, but controlling the energy through the way he builds up the beat and the impressive fills he throws in. No question that Fabrizio Grossi is as good a bassist as he is a lyricist, and he works so well with Aronoff. This leads us back to just how excellent Lance Lopez is as the singer / guitarist who fronts the band. The album is much more than a band with some superstar guests – this is a great band who can integrate some terrific guitarists to enhance the songs, without detracting in any way from how good the band is.

Grossi has said, "Lots of people have been saying to me ‘why does Supersonic Blues Machine always bring guests around? You guys can stand your own ground', and there are three answers to that : (1) we're all super friends and we're having a blast, (2) most of them don't give lessons and for us it's
only way to learn their secret "ways", and (3) because the inspiration and the challenge they bring to
the table!"

I am off to dig up the first album, and Lopez two core solo records as soon as possible – another great blues player I have overlooked to date. This one comes out on October 20 th on Provogue Records, through Mascot Label Group.