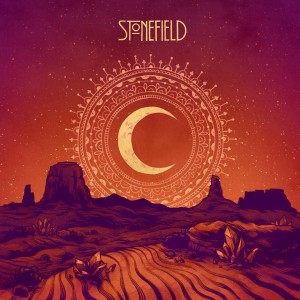 Ever since they won Triple J’s Unearthed High in 2010 the four gorgeous Findlay sisters known as Stonefield (and previously Iotah) have had to face their fair share of criticism over their image and being discounted as a “teenage gimmick”. The quartet was surrounded by lots of hype as the band is made up of four sisters who range in age from being teenagers to in their early twenties. They also got to play Glastonbury festival quite early but they do have the talent to back it all up. On their eponymous, debut record they continue to thumb their noses at their detractors as they offer one solid and promising effort.

The album was 12 months in the making and was produced by Ian Davenport (Band Of Skulls). The ten tracks feature a darker sound than the music offered on their previous EPs. These young women also dig deep on this effort by describing the transition they’ve either made or are making from being children to adults. Once again, they are making old-school, seventies inspired psychedelic and rock sounds with an added modern twist. It means they can hold their own alongside the retro leanings of bands like The Strokes, Jet and Wolfmother.

“C’Mon” is a song that could’ve appeared on either of their EPs. It also sounds like it could’ve been written by Deep Purple because loud, crashing drums are coupled with a big, organ sound and a dirty, killer guitar riff. It ensures that things open with a bang and this energy also carries through into “Love You Deserve”. The latter is a catchy number that teases the listener while also offering copious amounts of wisdom and perspective. It’s about realising the need for self-respect and growth and how you should ultimately trust your instinct.

Their first single, “Put Your Curse On Me” is easily their best track. It features Melbourne’s Mass Gospel Choir and is some powerful, Aussie rock. Its biggest drawcard is front woman, Amy Findlay’s powerful vocals. In some ways Findlay is like Suze Demarchi in that she can hold her own amongst a loud band by rocking and rolling and she can also show raw emotion when she needs to.

The girls don’t just create head-banging tunes. On “To The Mountains” they show a greater sense of maturity as they explore the pop genre in more depth and craft something that has a few things in common with Fleetwood Mac (who they’ll shortly be supporting). It’s also about realising and learning about what’s important in life and placing a greater emphasis on this rather than what’s trendy at any given moment.

“Diggin’ My Way Out” is also a little more experimental. In this song these lovely ladies journey like The Doors into the desert and then segue off into space. It’s a quieter sound and a vibe that is also replicated at the beginning of “To Whom It May Concern”.

Stonefield know how to write a decent tune and even at their age, they have the musical smarts not to go and create an album that’s just a grab-bag of beats, riffs and harmonies. Their debut effort will not win any prizes for its simple and repetitive lyrics but the intensity of their live sound compensates for the holes that exist in this regard. The group are ultimately so young and so talented and have created one helluva album that’s best played loud, because its sheer feistiness, power and organic energy hints at even more good times to come from the family Findlay.

Click here for all of our Stonefield articles and photos