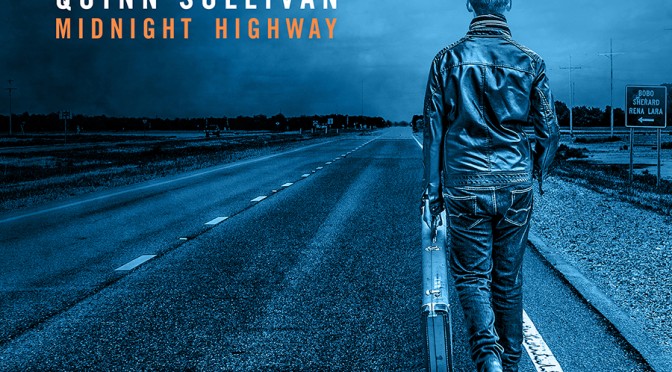 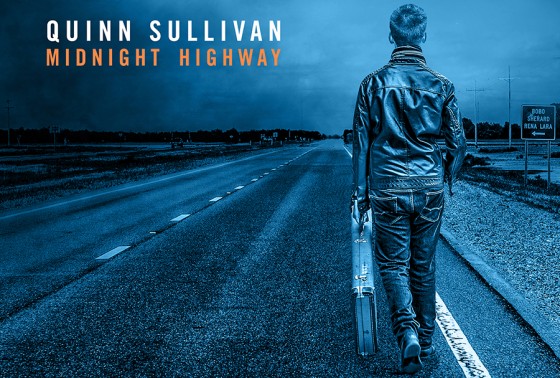 Quinn Sullivan is another young blues guitarist, already classed as a “prodigy” at 17 years old by some fairly credible media (Rolling Stone and The Washington Post), and when Billy Gibbons reckons you have mastered the blues, and Buddy Guy says “Players like Quinn come along once in a lifetime” you get the idea that there could be something special about this guy.

There is a mature pop feel to Tell Me I’m Not Dreaming that shows the breadth of songwriting talent and musical experience in Quinn’s corner. The overall feel is reminiscent of John Mayer or Matchbox Twenty, with an amazing huge production feel, and some terrific vocals throughout.

This is the third studio album, and was produced by multi GRAMMY® winner Tom Hambridge – who also does double duty as Quinn’s studio and road drummer – and will be released on March 24th, 2017 through Mascot Label Group. The title track Midnight Highway is a slower melodic blues number, with the song given extra depth by the Hammond organ that is prominent. Quinn has a pure and melodic voice that is really well-balanced by the slick mature guitar work and the full, lush backing from the band, several of whom are musicians who played on the Buddy Guy albums that Hambridge produced. These include bassists Michael Rhodes and Tom Macdonald, guitarist Rob McNelley, and keyboard player Reese Wynans, a veteran of Stevie Ray Vaughan’s Double Trouble.

There is another modern twist in the feel of Crazy Into You which is just a superb blues-rock- pop song, with a crunchy riff, and stupidly catchy chorus and melody, with a quality solo – this deserves to be a massive hit single. Then we roll into a simple country-blues workout is provided by Eyes For You, which again shows off the vocal prowess and delicate, clean guitar work as a one-man effort.

Lifting Off does not really belong on a blues album, with a retro pop vibe and jazz funk backing guitar riff – more like something Daft Punk or Bruno Mars might come with than a blues song – but again shows the variety of sound that this guy can produce.

This is also a feature of She Gets Me, which opens up in a restrained fashion before the band gets involved, and Quinn absolutely lets rip on guitar, and then does it again…..and again! This track is where he really lets loose with some blistering lead work, and makes me wish that there was some more of this reckless abandon on the record. A soft and mellow track Going, again shows the crossover potential here, with an adult-oriented radio friendly pop feel, underpinned by some beautiful guitar work.

Something For Me opens up with a haunting tone and the distorted vocals of an older and more well-worn bluesman, before morphing into a superb mix of clean blues guitar and honky-tonk piano, over a laid-back drum beat, and features some scintillating licks as the song builds up and then fades out to the close.

A number of bonus tracks are included – Rocks features a really tasty guitar riff that will have feet tapping immediately, and is more in the modern blues rock style of Kenny Wayne Shepherd, with some sterling keyboard work and a guitar/organ duel that is sheer delight. A more upbeat traditional blues feel comes from Graveyard Stone with the backing band showing their skills on keyboards, drums and percussion, all of which serves to give Quinn’s blistering guitar work more prominence. Big Sky is an instrumental that opens with a plaintive piano and guitar melody that grows as the band joins in to paint a canvas of open plains and mountain outcrops of many a western movie.

The Beatles classic While My Guitar Gently Weeps is given a fresh but respectful re-working with a crisp acoustic rhythm guitar and a very George Harrison vocal sound, before Quinn gives the guitar break his own touch, and then changes the tempo subtly through the later chorus and closing solo which shows real passion as it reaches the crescendo.

There is an extended intro to Buffalo Nickel that is worth listening to a few times to get the sense of how good a guitarist this is – he’s shared the stage with the likes of Buddy Guy, Eric Clapton, The Roots, Derek Trucks & Susan Tedeschi, and he opened for B.B. King, who later invited him to play his treasured “Lucille” guitar. This one is an eight-minute instrumental epic that brings another of his admirers to mind in Joe Bonamassa, and features several different styles of guitar-work, all of them highly impressive – including a slightly eastern feel and some that is more to the jazz end of the blues spectrum.

This is not a traditional blues record by any means, but a top quality production featuring some great songs, excellent guitar playing, and some moments of virtuoso blues guitar work that certainly showcase the multi-faceted talents of this young man.