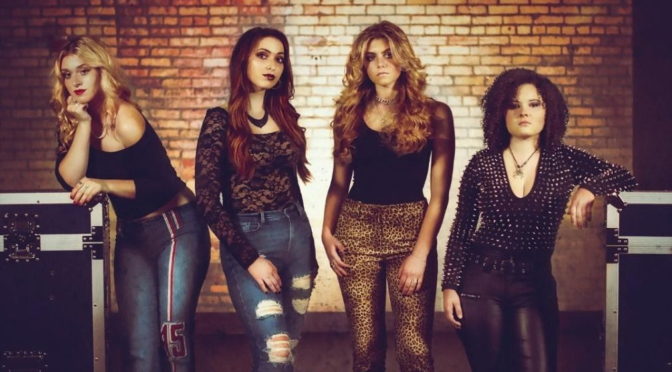 The Press Release and the photo give a pretty immediate impression of what to expect from this upcoming release, and while one might think that the band is a modern-day creation of some A&R Svengali thinking we need another Runaways or Donnas – one listen to the opening track from Plush smashes those preconceptions pretty comprehensively.

I remember when I heard the first Van Halen album back in 1978 and knew that this was something a bit special!  Well this release is right up there too!

[PR Release] PLUSH is composed of four talented women, under 21, whose accomplishments and talent eclipse their age. This female rock force is fronted by singer, songwriter and guitarist Moriah Formica. Drummer Brooke Colucci, guitarist Bella Perron and bassist Ashley Suppa round out the lineup.

Moriah skyrocketed to national recognition when she auditioned for NBC’s “The Voice” at 16.  She became one of the youngest competitors in the show’s history to turn all four judge’s chairs and the only NBC’s The Voice contestant to get all four chairs performing a rock-based song.  Her performance of Heart’s “Crazy on You” garnered viral fame and lauded the 4’11” star as a “pint-sized powerhouse” by judge and Maroon 5 singer Adam Levine. Miley Cyrus referred to her as a “Rock Goddess”.

Brooke Colucci, known by her moniker Rock Angel, has several viral videos of her own as well, generating over 14 million views.  Lead guitarist Bella Perron is a freshman at Berklee College of Music and a guitar virtuoso.  Bella adds to the band’s ferocious melodies with amazing backing vocals and a no holds barred brand of uncompromising rock.

Bassist Ashley Suppa, hailed as the “female version of Cliff Burton”, adds an undeniable bass undertow that must be seen as well as heard to be believed.

So, I am happy to put the PR aside and focus on the music.  The band has just been on a US tour with Seether and Nonpoint, and is about to head out with Wolf Van Halen’s Mammoth WVH in October, before a November run of dates with Evanescence and Halestorm.

The album opens up with the absolute monster track that is Athena whose gentle intro does not prepare you for the intensity of the riff that explodes, with the devastating bass line and the rock solid drums under the slightly menacing vocal line, and while you are taking this all in, the discordant pre-chorus and the main chorus takes it up several more levels with aggression and harmony combined, which then gets amplified in the middle-eight, from both voice and guitars.  This is an amazing track on so many levels – supremely powerful melodic metallic rock.

And then rolls into Champion, which is a more contemporary beast, in which Moriah’s voice delivers a quite extraordinary performance of clarity and raw power that is even more impressive than the opening track, and sees some extravagant drum patterns, vocal harmonies, and a powerful riff section in the pre-chorus that is echoed in the backing to the solo, before Moriah’s voice takes some additional leaps into the stratosphere which are frankly mind-blowing.

The new single Hate places the band more in the modern rock genre if one needs any sort of label – with elements of Breaking Benjamin, Skillet and Halestorm, but also stays very true to the sound and fury of the opening two tracks.  This is not a band following a genre….this is a band setting their own stall out, without caring what anyone else decides they might sound like.  Moriah sounds a bit like Nancy Wilson crossed with Till Lindemann, but her voice is one of the most powerful and intense female vocalists you will have ever heard! And the rest of the band absolutely delivers the power and passion to support her.

There is an intricate beat to Found A Way Out that sees Brooke and Ashley lay down a wicked tempo, while Bella provides a clinical riff through the verse and an even catchier hook under the chorus, before delivering the simplest of solo breaks, and then providing some additional melodic lines beneath the lead vocal.  Another cracking offbeat intro to I Don’t Care leads into another belter of a track, which reverts to a more straight-up rock chorus, before a variety of super-heavy riffs and an acapella element break up the track, before piling back into another chorus – with yet another ridiculous lead vocal highlight from Moriah.

There is an undeniable enormity to the overall sound of the album, even through my meagre streaming set-up, and the production from Johnny K (Staind, The Disturbed) allows the four band members to deliver with such intensity and fire, while never losing control of the song structures, maintaining the melody and dynamics to ensure this is not an overblown aural assault, but a wonderfully crafted performance of restrained power on several levels.

The next three tracks show that particular characteristic to full effect – slightly down on tempo and volume, with plenty of variety between verse and chorus, and which both build themselves up to the crescendo of the later choruses, with Moriah continuing to blow the listener away with the soaring clarity of her vocals.  Sober has so much light and shade on display before the

There is an impressive intro to Better Off Alone and a staccato drum-driven verse pattern before another one of these epic choruses that are very much a hallmark of the Plush sound.  There is some great intricate guitar work behind the vocals in the chorus, and a mellow mid-section that takes us into the reprise of the chorus.  A deliberate pace opens up Sorry before a stripped-back verse, and a vocal eruption of each “Sorry” as the opening word of each chorus line.

Why Do I Even Try has an engaging tone to the guitars through the verse, and some nice vocal interplay in the pre-chorus, before Moriah takes it away again, leading into another under-stated but clinical lead break from Bella, who also shows off a nice range of short riffs here.  We are back in the heavier zone for Bring Me Down, and Brooke shows off her real drumming skills with some crisp snare and tom-tom work throughout the track, with some epic accents towards the close.

While a number of the tracks display an anthemic feel in the choruses in particular, there is a real ballad next up in Don’t Say That You Love Me, which has a stadium-rock quality that will see the arenas lit up with mobile-phones like the lighters in the air when Heart were playing What About Love back in 1985!  This has power and passion to burn!

The brutal riff is what Will To Win is all about, and it sets the track up so well, and then you also hear what the rest of the band are doing in the backing track, and with the multiple layers of harmonies in the vocals behind the searing lead vocal line.  There are a couple of extra elements in the track which really show off the skillful songwriting as well as the playing, with really good guitar work throughout.

13 tracks is a solid 50 minutes of music, and the album closes with Walk Away, an upbeat shout of independence from Moriah that again ranges from touching voice and piano elements to a powerful chorus that really motors along.  Bella delivers perhaps the longest solo on the album – all of 19 seconds of it.  Her real contribution to the band is not the guitar histrionics of extended solos, but the classic rock guitar tones, the multiple chord and riff structures in the songs, and the addition of really neat touches, licks and wails in between and around the vocals.

When you have a lead vocalist with the range and power of Moriah, the potential to overdo those lead breaks could lead to confusion and clash, but the band gets the balance just right here, and multiple listens to the record keep me finding new elements within the guitar lines that enhance the melody and add to the overall feel of each track.