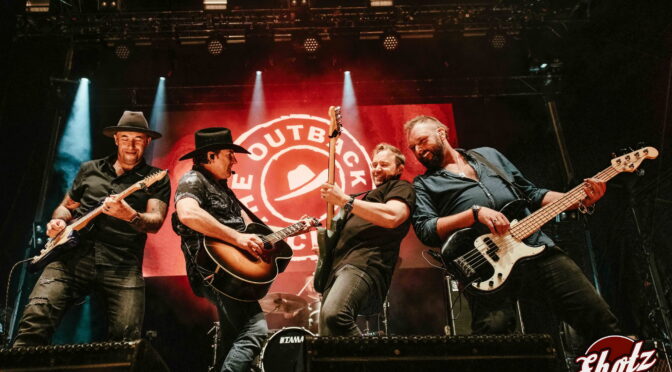 Released on April 15, 2022, to coincide with his birthday. Lee Kernaghan has provided his thousands of country fans with an opportunity to cruise the highway listening to his past thirty years of hits and memories.

Recorded Live in 2019 at, the Deni Ute Muster live is a compilation of Kernahans greatest hits recorded in one of the unique places on the planet.

Deniliquin (or Deni as it is known to the locals) Ute Muster is the largest of its kind in the world. Deni is situated on a flat and open plain approximately 80kms from the Victorian border in South West NSW. Since the inaugural festival in October 1999, which was attended by a few thousand, the town Deni has been regularly invaded by up 20 000 people.

From his inaugural appearance at the 1999 muster, Kernaghan has played the main stage multiple times, always to a packed and loyal audience. You know the fans are in town by seeing ‘No Ute No Route displayed on multiple utes. When team Kernaghan is in town, he owns the stage. A Walkthrough the local camping paddock and fans greet with anecdotes of musters gone by, appreciated by Kernaghan and the band. Most artists do not bother with this sideline to the festival; it is like going home for Kernaghan. There is always time for the fan, a handshake, an autograph, and a selfie.

Kernaghan is backed by the Wolfe Brothers, comprising multi golden guitar-winning brothers Nick and Tom. One of country music’s best guitarists, Brodie Rainbird adds another level of professionalism to the act. The Wolfe Brothers have been gracing the stage with Kernaghan for almost a decade. Far from a backing band, these musicians remain the engine room that helps drive the Kernaghan machine.

This album brings the listener onto the Deni main stage, complete with a capacity audience. The ‘Boy from the Bush’ has thousands of loyal fans that travel nationwide to hear their hero play. Kernaghan’s setlist is proudly patriotic as a multi golden guitar winner and former Australian of the year. The years of touring and headlining are evident in this album. Songs like ‘Australian Boy’ and ‘Boys from the Bush’ are staples on the diet of every country fan across the land, and boy; there are plenty of them.

Having seen Kernaghan multiple times over the years, I am convinced he is most at home on the plains of Deniliquin. ‘Shes My Ute’ remains the unofficial anthem of the muster. To stand on the edge of the stage staring at the vast flat plains listing to your fans, young and old, sing all your songs word for word must be the ultimate.

The 20-song setlist, complete with dialogue, is a retrospective of 30 years, 41 number one hits, and over 2 million in album sales. The staple tributes to the king of the country himself, Slim Dusty ‘ Lights on the Hill’ and the Kernaghan penned ‘Flying with the King.’ go over a threat. The only thing missing for the listener is the visual of the lights coming from the audience. The ‘Spirit of the Anzacs’ is a powerful anthem sung with respect to those that have fought and continue to serve our country to the current day.

Finishing the set with ‘The Outback Club, ‘ anyone there that night would have been scrambling to find a membership application, not that there would be many new members. Everyone who knows this bloke and new fans will enjoy the live experience. I look forward to hearing Lee Kernaghan Live blasted around the campground at the ute muster this year.