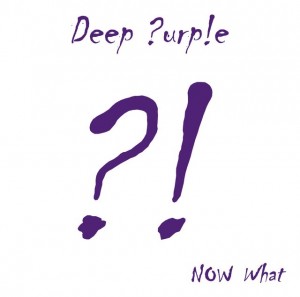 When you list the great names of rock music from across the decades, Deep Purple has got to be hovering close to the top. Blasting out rock numbers for more than 40 years they have certainly found the formula for success. Releasing the long awaited new album; this comes 8 years after the Rapture of the Deep album released in 2005; the magic is still as strong. With a title like Now What?! it makes you wonder whether the band is thinking that they have done it all. Well actually, they probably have. The current line up works well together and this can be heard from the new 11 tracks that they have laid down.

This album has got it all and more. It’s classic Purple at their best harking back to the heady days of their peak in the 70’s and bringing some new direction for a new generation. Ian Gillan’s distinctive vocals are as strong as ever and give their new album that familiar taste that all Purple fans hanker after.

Album opener “A simple song” is sweet mix of guitar and keyboard, you get a flashback to what once was.

“Weirdistan” and “Above & Beyond” take on a slightly different direction. These tracks show off Roger Glover’s bass playing abilities mixed with Don Airey’s keyboard mastery. Steve Morse gets included with a guitar solo to show why he’s one of the world’s best.

“Out of Hand” shows off Ian Paice’s great ability on Drums with the perfect coextension to Morse’s guitar work.

Don Airey steps into the limelight on the track “Hell to Play” fitting into the Deep Purple family unit beautifully.

“Blood from a Stone” changes direction slightly and goes for a bit more of a Blues taste. This shows how versatile Purple is when it comes to changing genres. They handle the change so well.

“All the time in the World” slows down the tempo and shows again that Purple can handle changes easily as they contemplate a bit of soft rock.

Rounding out the album is “Vincent Price”. The track begins like the start of one of Price’s movies with the reverberating organ leading the song into Gillan’s vocals, a perfect choice for the ending of the album.

The only disappointing thing about the album is when it comes to an end. The good thing is that you can listen to it all over again. So when Deep Purple say Now What?! The answer is just keeping doing what you do best. This is another album to put alongside the other classic Purple albums.