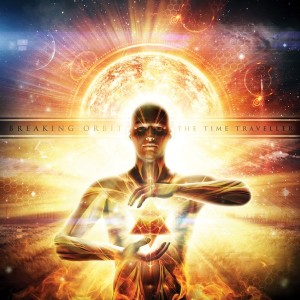 Sydney four piece Breaking Orbit’s debut album The Time Traveller has been a long time coming, with a name change and some member shuffles preceding its release. The wait was certainly worth it, though. The Time Traveller has blown anything done by any other Australian progressively minded band out of the water, save for maybe Karnivool’s Sound Awake and Cog’s The New Normal. However, Breaking Orbit do things slightly differently, placing a heavy emphasis on the tribal and percussive elements in their sound. The result is a debut album of monolithic proportions.

The familiar amalgamation of heavy alternative and progressive genres is certainly apparent, however hints at tribal music and some dabbling in electronic samples ensure The Time Traveller stands out as a record in a vastly oversaturated scene. Opening track ‘Echoes’ is a slow burner with thudding bass guitar, soaring vocals and a distinct touch of post rock influence, immediately showing the band’s diversity. This trend continues throughout the record, with each track offering a different side of Breaking Orbit to the listener. Instrumental track ‘Machiguenga’ is the perfect example of this, featuring an array of tribal percussive instruments and flute passages.

Singles ‘Callsign’ and ‘My Direction’ show that the quartet are equally adept at writing punchy hard rock tracks, as well as the stretched out epic numbers. ‘Callsign’ in particular stands out, particularly as a result of Matt Quayle’s intense vocal performance. With a voice reminiscent of Oceansize’s Mike Vennart, Quayle manages to walk the line of providing power and beauty to the record, whilst never detracting from the other instruments. Similarly, ‘Orion’ is an outstanding display of melody, particularly throughout the chorus before its chaotic ending.

Some of the most impressive moments on the record occur when Breaking Orbit are at their heaviest. In particular title track and ‘Cassandra Syndrome’ come to mind, both possessing plenty of chugging guitars amongst complex rhythmic arrangements. The title track is probably the best representation of Breaking Orbit as a whole, as it traverses the full range of their sound, from soft to heavy. With Quayle’s best performance vocally on the record, as well as some impressive percussion via Mark Tyson and Dylan Mitrovitch make ‘The Time Traveller’ the standout track.

With the release of their debut, Breaking Orbit have announced themselves in a more than impressive fashion to the Australian rock community. The Time Traveller will demand your attention and toy with your emotions, a clear contender for album of the year and one of the best Australian debuts in recent memory.