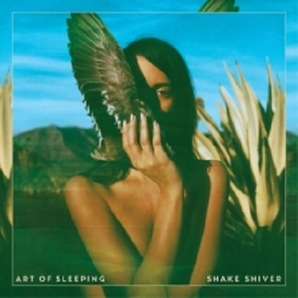 After much anticipation and showing promise in their teaser tracks, Brisbane five piece Art Of Sleeping‘s Shake Shiver has arrived.

Frontman Caleb Hodge’s wistful harmonies have a touch of sadness and desperation, as he clings to a romantic love that is long extinct.

Opener ‘Win Your Heart’ has soothing breezy vocals and blends folk rock with busy percussion and catchy riffs. The voice of longing jumps right in with no preamble: “Don’t tell me that we’re too far gone and we’re sinking.”

‘Crazy’ was the first single release. The clean cut sound has building riffs and drums at front and centre with a perfectly timed beat.

The layered guitars are impressive, with deep riffs placed on top of acoustic plucking and wiry fadeouts. Repeated chanting choruses of “ooooooohs” and the rumblings background drums add to the chilled atmosphere.

Honestly though, they start sounding a bit creepy. With lines like: “If only I could make you stay,” Hodge would benefit from being told to get it together and accept the fact that she’s gone.

It seems like he’s starting to face reality with ‘I’m Not The One.’ The overstated drums should’ve been pulled back a notch as they detract from the moody vocals: “I’m only gonna let you down” and “Only for a moment / I hold you like I mean it / I hold your like our love is true.” The acoustic reprise after the initial fadeout is a nice touch.

Thankfully, for every rule there is an exception or in this case, two. ”Voodoo’ really got it right with its ambient post dubstep influences. Hodge brings the album back to life here and is no longer going through the motions. While still the same theme of clinging to lost love, this track is the well balanced mix of electro-sounding drum effects and reverberating bass line with occasional sniffs of electric guitar and hooky lyrics – ” My heart’s gonna make / gonna make me break” – we’ve been waiting patiently to hear.

The other standout is ‘Burning Bright,’ a vulnerable folksy number that is stripped back to its bare bones. They’re sitting alone by a campfire and drinking a bottle of whisky, strumming and singing from the heart, pleading: “Why do you treat me like a stranger?” ‘Burning Bright’ is easily the most emotive, most believable song on the album.

If all tracks had the same vigor as “Voodoo,” it would have saved Shake Shiver from mediocrity. Hopes will be high for the sophomore release.

This is a slow burner, and Art Of Sleeping come close to burning out because though Hodge’s voice is emotive, it’s largely unconvincing because is too often drowned out by too many instruments. Both are great separately but when brought together, are out of place and come across as a confused mash up of misplaced talent.