My friend had never heard of Adam Hills, he doesn’t even own a TV, so he was in for a pleasant surprise. Adam is an amazing man and a brilliant comedian. Billy Connolly said he would be the next hottest thing in comedy and so did the Edinburgh Festival which has nominated him for the Perrier Award (the highest comedy accolade) three times.

He has a genuine desire to get people involved in his shows and make them happy. He connects with the audience within the first few minutes on stage and when he does single out an audience member, they’re always going to have a great time – being chosen for fun, not ridicule, often going home feeling like a rock star or at least a boy band. Adams enthusiasm is infectious, especially with the Auslan interpreter, (Linda) which means all the rude words get spelled out, so you get to laugh twice.

This is stand up comedy at it’s best. Adam says “I really enjoy making Spicks & Specks, but I really love doing stand up comedy. I can’t wait to get the stage to myself, and to be allowed to say some rude words occasionally.” His finale includes a version of the National Anthem sung to the tune of Working Class Man. Barnesy never sounded this good, try listening to that song now without changing the words. Whoa Whoa oo Advance Australia Fair!

See Adam today before he gets too famous, he is a huge star on the rise. Go you big red fire engine! 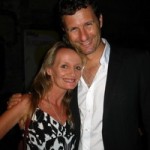