The young gunslinger headed to LA to record Cut Against The Grain in 2016 with producer Fabrizio Grossi who has previously worked with Alice Cooper, Dave Navarro, Slash and Zakk Wylde. The album highlights a prodigious young British rock talent completely at one with his guitar, blasting out his first songs with a raw and powerful attitude.

Cut Against The Grain is not your typical debut rock album. It showcases Americana tinged slide rock guitar in tracks such as Against The Grain, Down and Sun’s Gonna Shine. Flashes of Gary Moore haunt the epic Just One Question and All The Right Moves, a co-write with three time Ivor Novello winner and international hit writer Paul Barry (James Bay) exudes the looseness and edge of a young Rory Gallagher meets the New York Dolls circa 1973. 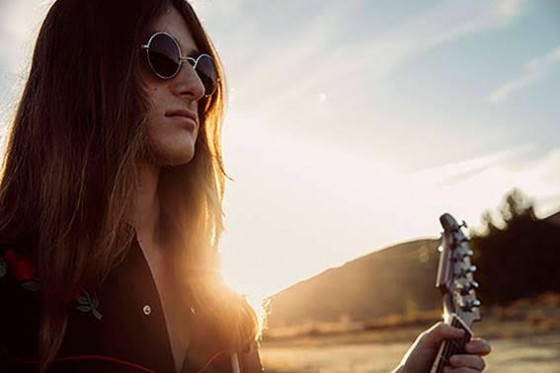 Aaron Keylock picked up the guitar aged 8 and by the age of 11 he was rocking the clubs in his hometown, Oxford. Already a young road rock warrior with hundreds of shows under his belt; at age 12 he was arguing with club doormen who wouldn’t let him into venues he was booked to play. He’s performed at the historic Jazz Café and Alexandra Palace in London as well as the Ace Café. He’s played Biker rallies across the UK where Harley Davidsons would screech on the stage around him, filling the room with smoke during the gigs.

By the time he was 13 years old Aaron was playing every night of the week and met modern guitar icon Joe Bonamassa who gave the young gun advice from his time as a young guitar hero; aged 14 – he was bundled out of the backdoor of the Camden Blues Kitchen as the London Riots raged across the city; at 16 he supported US rockers Blackberry Smoke on their ‘Leave A Scar’ UK tour, bedding down in shops after each show with one night sleeping in a workshop surrounded by motorbikes, rifles, snakes and a 9 foot python.

The crowd at the UK Bloodstock Festival head-banged to Against The Grain in 2014 and at Download 2015 (UK) he played to a squeezed-to-capacity tent. Since then, he has gone back on tour with Blackberry Smoke for the 2016 ’Like An Arrow’ tour, been on the road with The Answer, The Cadillac Three, The Graveltones, Wilko Johnson, Joanne Shaw-Taylor and Dan Patlansky as well as performed blistering sets on the 2015 festival circuit at Dot to Dot and Ramblin’ Man.

While referencing his heroes including Johnny Winter, Rory Gallagher, The Allman Brothers, The Faces, Led Zeppelin, T Rex and Blackfoot, Aaron writes all his own songs. He explains, “It’s the music I grew up with, it’s what I like, but you can’t base yourself on someone else. You’ve got to be inventive and see what comes out.”

Momentum has been building over the past few years for Aaron Keylock, and with Cut Against The Grain he looks set to launch himself on the world full throttle.

Check out the lyric video for title track Against The Grain below.