Opening up the evening were Melbourne’s very own Fading Hour. Delivering a blend of progressive rock in the vein of Karnivool, the band proved a great opener for the night ahead. Lead singer Mick Camelleri was a proverbial ball energy, bounding around the stage providing an excellent way to start the night.

With a set consisting of a couple of new songs, as well as tracks from their Enigmatic EP, second act Bellusira went on from where Fading Hour left off, providing an outstanding set of melodic rock. Their set highlight was easily the band’s latest single (and best song to date) ‘Closer To Me.’ Vocalist Crystal Ignite was her typically energetic self, working the crowd with ease and impressing with her outstanding vocals.

When Brisbane’s Electric Horse ventured out it was clear the five-piece had a decent following in Melbourne. The faster paced tracks like ‘They Say’ and ‘Something To Believe’ went down a treat for punters, with a small pocket of diehard fans singing along to every word.

When Floating Me, Australia’s very own prog supergroup took to the stage; it was to quite a raucous reception. After less than a year as an active touring band, Floating Me have been a revelation in terms of Australian progressive music. Tracks such as ‘Deathless,’ ‘Sugar’ and ‘Spirals’ exhibited the sheer power the band possessed, particularly due to the band’s talented rhythm section (Jon Stockman of Karnivool and Lucius Borich formerly of Cog). Front man Andrew Gillespie is a force behind the microphone, with his baritone resonating throughout the room. The band’s more industrial tracks such as ‘Narke’ continued this trend, while ‘Bezhumous’ essentially caused a meltdown as Borich ripped through one of the more powerful and impressive drum solos anyone will get to see in Australia. Even including a very trippy, very haunting cover of Jefferson Airplane classic ‘White Rabbit’ was a masterstroke, proving the band could do no wrong. Based on this set alone, Floating Me are bound to create waves throughout the Australian music scene. Floating Me will be huge, make no mistake about it.

Closing out the night was the ballsy rock of Thousand Needles In Red, playing cuts off their self titled EP and forthcoming debut album. Front man Clint Boge (also of Butterfly Effect fame) had the crowd in the palm of his hand from the get go as the band ripped through tracks off their self titled EP and forthcoming debut album. Highlights included the band’s newest singe ‘Into Eternity’ and the impressive new track ‘Scars.’ Similar to Floating Me, for such a young band, Thousand Needles In Red show a load of class and stage presence. When TNIR’s album drops, expect their profile to continue to rise exponentially as they definitely have the chops to go far.

Tonight was indeed a clear indication of how healthy Australian music is at the current moment. Particularly if such young bands like Thousand Needles In Red and Floating Me are capable of selling out a venue like the Hifi Bar. An excellent display of original and energetic Australian rock. 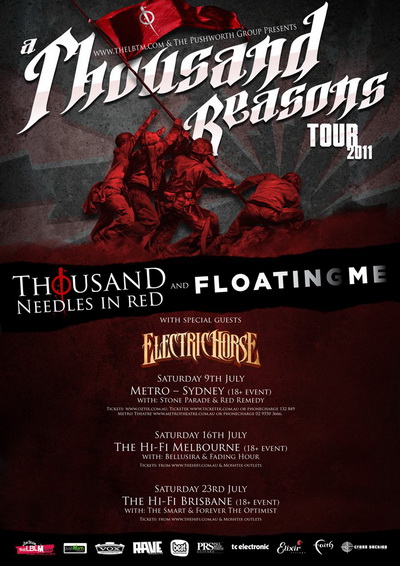