life is noise is pleased to announce the supports for the 2015 tour of US noise rock outfit A Place to Bury Strangers.

Joining A Place to Bury Strangers in Brisbane, Melbourne and Sydney will be Flyying Colours.

Flyying Colours don’t so much emulate their idols as they crystallize the tenets of shoegaze into a sound that’s at once reflective and modern. On their second EP, ROYGBIV, the Melbourne outfit weave dreams of infinite colour palettes with a flood of celestial distortion. In their live show, Flyying Colours are a mesmerizing trip – like floating away to an astral plane on an ocean of treble and whispers.

“Far from worshipping at the foot of early-‘90s icons, this is shoegaze done right.” – Beat Magazine

In Melbourne at The Corner, A Place to Bury Strangers and Flyying Colours are joined by Luna Ghost. Cloak yourself in a veil of reverb as these four kick off what’s sure to be the best shoegaze show you’ll see in Melbourne this year.

In Sydney at Manning Bar, start your night with an aural trephination courtesy of the distilled fury of Narrow Lands, who you may have last seen opening for another trio of noise merchants, Boris, back in May.

And at Crowbar in Brisbane, freak out to the sonic disruption of Queensland’s premiere ritualistic psych rockers Dreamtime before they steal away to finish their next record.

A PLACE TO BURY STRANGERS

It’s almost become a cliché now: “the loudest band in New York.” So renowned is the reputation of A Place to Bury Strangers’ wall-of-sound assault that the Brooklyn trio even sell their own branded earplugs on tour. But if you’ve ever found yourself enveloped in the synesthetic chaos that is their live show, you’ll find they more than live up to the moniker. And if you haven’t, well, you’re in for a treat. That’s because A Place to Bury Strangers’ live show is one of the best in the world. These three are merchants of sensory overload, claiming every inch of space for their kaleidoscopic orgy of light of sound.

After nearly a decade, A Place To Bury Strangers is as explosive as ever. – CMJ

Make no mistake – APTBS’ legacy extends far beyond their notoriety of as a live act. In their decade-plus career, APBTS emerged as one of the cornerstones of New York’s post-millennial indie rock landscape, inflecting the post-punk revivalist tendencies of their peers with an ever-mutating sonic sensibility founded on fucked-up distortion, shimmering reverb and dark grooves. The three-piece remain firmly rooted at the heart of modern DIY, channeling punk rock spirit through both their bombastic sound and fiercely self-sufficient practice. Frontman Oliver Ackermann was integral to the now legendary defunct underground performance space Death by Audio that also played host to his boutique effects pedal company of the same name, and the band’s endless touring schedule has ensured their reputation for volume spans not the five boroughs but the entire globe.

A Place To Bury Strangers concert is a strangely romantic affair: turbulent, dark, aggressive, confused, even sensual. – The Quietus

Their latest record, Transfixiation, deconstructs their sound to its core elements: machinic rhythms that oscillate between cold and catchy beneath frenetic whims of cascading guitars and Ackermann’s Peter Murphy-esque intonations. Yet the spirit still remains the same – these songs are fractured and frenzied, demanding a physical space in which to twist, decay and unfurl.

The sonically overdriven sound they’ve accomplished is no clumsy accident, but a carefully cultivated and well-maintained entity all its own, fostered by an unbridled passion that’s clearly evident in every live show they play and each recording they make. A Place To Bury Strangers does not so much play songs as allow them to pour out. They are songs about longing, heartbreak and confusion played extremely well and at a passionately loud volume. – Brainwashed

A Place to Bury Strangers are everything a modern rock band should be: unpredictable and chaotic, with a live show that leaves you fucking slayed. Don’t forget your earplugs.

A wall of sound does not even begin to describe the effect on the ears when the New York band A Place to Bury Strangers performs. From the pulsing floor, through your toes, and up your spinal column, everything in your body starts to tremble. – The New York Times

Witness A Place to Bury Strangers’ explosive live show on the following dates:

Tickets on sale now through lifeisnoise.com, Oztix and venue outlets. 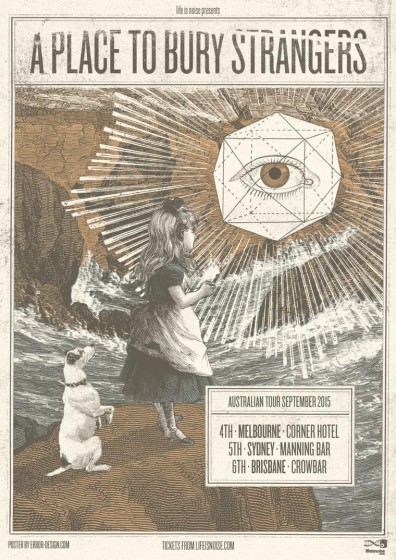