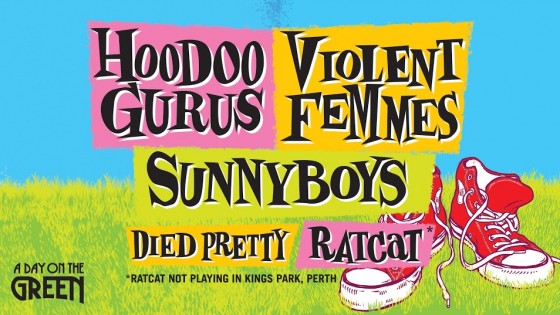 From the golden age of indie-rock comes three giants of the era, three acts so magnificent in scope it takes several wineries to contain them!

Hoodoo Gurus, Sunnyboys and Violent Femmes are teaming up for the very first time this summer in a three-way, no-holds barred attack on the aural senses.

Peter Oxley (Sunnyboys): “What a line up. Whoever thought of this is a genius. To quote Nick Lowe “pure pop for now people”. Sweaty nights with the Hoodoo Gurus at the Trade Union Club. Perfect pop sing-a-longs with Violent Femmes. Oh yeah and Sunnyboys – ALL RIGHT! Very excited to be touring with such a great line-up of really great bands. I’ll be dancing in the wings. Surely the highlight of summer 2016.”

But wait, that’s not all! This all-star bill also features an equally as impressive undercard with fellow indie-giants Died Pretty dusting off the dancing shoes for the first time in more than seven years, while the bastard offspring of the whole motley bunch, Ratcat, round out summer’s most FUN bill. (*Ratcat not playing Perth).

Dave Faulkner (Hoodoo Gurus): “Sunnyboys, Violent Femmes and Hoodoo Gurus? Yeah, we go way back. Sunnyboys were the first band I fell in love with when I moved to Sydney from Perth. I would play their first E.P. over and over again on the jukebox at French’s Tavern in Oxford Street, Darlinghurst. Hoodoo Gurus formed around that same time and the Sunnyboys helped us out with some choice support slots. Flash forward a couple of years: Hoodoo Gurus have a record contract and we happen to be on the same label as the Violent Femmes, the Femmes even taking the place of The Gurus at our Stoneage Romeos launch after I contracted laryngitis – how cool was that?! I loved the Sunnyboys and Violent Femmes music then – and I still do now. Like I said, we go way back. We’re huge admirers of Died Pretty and Ratcat too, so this line-up is truly “all killer, no filler.”

The genesis of all three bands, Hoodoo Gurus, Violent Femmes and Sunnyboys formed around the post-punk era of 1980/81, and all three would go on to play an important role in a worldwide musical change that saw indie-rock smash through the ceiling to achieve massive commercial success. Their respective debut albums Sunnyboys (1981), Violent Femmes (1983) and the Hoodoo Gurus Stoneage Romeos (1984) remain timeless; each one regularly appearing in various All Time Top 100 lists and between them containing a jukebox worth of classics: ‘Happy Man, ‘Blister In The Sun’, ‘Leilani’, ‘Alone With You’, ‘Gone Daddy Gone’, ‘I Want You Back’ and more. Songs that define a time but are not defined by that time.

Died Pretty, also, were born of that post-punk era and although they served a longer apprenticeship they achieved their masters status with 1991’s Doughboy Hollow and tracks like ‘DC’, ‘Godbless’ and ‘Sweetheart’. And Ratcat, providing the ultimate end point to the indie-rock / mainstream merger via their respective number 1 hits, 1990’s ‘Tingles’ EP and 1991’s ‘Blind Love’.

Brian Ritchie (Violent Femmes): “We here at Violent Femmes Touring Inc. are overjoyed to be bringing the music to our stalwart Aussie fans. To stand on the side of stage and witness the indomitable spirit and sound of the Sunnyboys is a longtime ambition of ours. As for the Hoodoo Gurus, we go back a ways with them. It’s 32 years when Violent Femmes played at the Hoodoos debut album release party. They are still rocking beyond imagination. We think the bill is complementary and elegant and are proud to be part of it.”

There’s no doubt there will be muchos affection for these five seminal Aussie bands as they re-unite and travel the country.

For more than three decades the Hoodoo Gurus have consistently been one of the most inventive, lyrically smart and exciting rock’n’roll bands Australia has ever produced. And they’ve done it with style, panache and a wicked sense of humour. Consistent chart-toppers, ARIA Hall of Famers, co-curators of the Dig It Up! Invitational and other accolades far too many to mention here, the Gurus have begun a new chapter of their story with Nik Reith taking over drumming duties from 30-year veteran Mark Kingsmill.

A new EP ‘Happy New Year’ announced a return to recording for Violent Femmes in April, their first new music in 15 years. Since reuniting in 2013 Gordon Gano, bassist Brian Ritchie and drummer Brian Viglione have embarked on wide-ranging tours and buoyed by the love from fans old and new, are currently recording a new album. The trio have released eight studio albums and more than a dozen singles, among them the classics as ‘Blister In The Sun’, ‘Gone Daddy Gone’, ‘Nightmares’, and ‘American Music’.

On April 22nd 2012, for the first time in 21 years, all four original members of Sydney band Sunnyboys, walked on-stage at Sydney’s Enmore Theatre. Appearing at the inaugural Dig It Up! Invitational the band played with the same intensity, verve and joy as they had all those years ago. It was emotional and inspired and there wasn’t a dry eye in the house. Fast forward to 2015 and the band have performed two sold-out tours of the country filling venues including the Sydney Opera House Concert Hall, Perth Arts Festival and set a venue record at the Coolangatta Hotel. This is the Sunnyboys – alive and well in the 21st Century.

It’s been seven years since Died Pretty last toured nationally as part of the Big Day Out, which followed hot on the heels of a triumphant tour playing the highly acclaimed ‘Doughboy Hollow’ album in its entirety. ‘Doughboy Hollow’ (originally released in 1991) remains one of THE all time great Australian albums, while ‘Trace’ (1993) and ‘Sold’ (1996) consolidated their place in the history books. The same classic line-up of Ron Peno (vocals), Brett Myers (guitar), John Hoey (keyboards), Chris Welsh (drums) and Steve Clark (bass) are keen to reunite for this tour and perform their most loved songs.

When Ratcat released their debut EP ‘Tingles’ in 1990, they garnered a huge fan base so quickly that soon after, their debut album ‘Blind Love’ and its single ‘Don’t Go Now’ debuted simultaneously at #1 on the ARIA Singles and Album chart – a staggering feat at any time, let alone for an independent band. After breaking up in the mid 90s, Ratcat have performed the odd rare show and frontman Simon Day occasionally has been known to strut his stuff in inner city Sydney with solo bands. They are greatly looking forward to this jaunt.

a day on the green is a fully licensed event. Strictly no BYO alcohol. Food will be available on site or BYO picnic. Deck chairs and picnic rugs are recommended. For all transport, accommodation and event information, go to www.adayonthegreen.com.au. 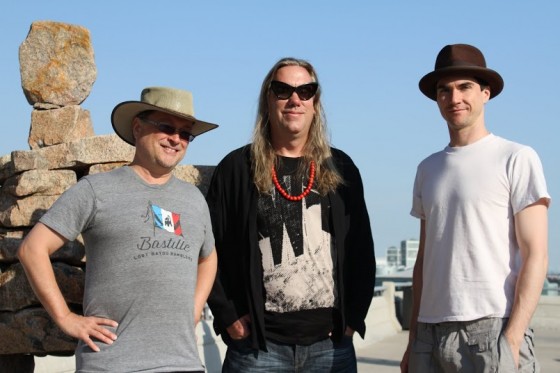 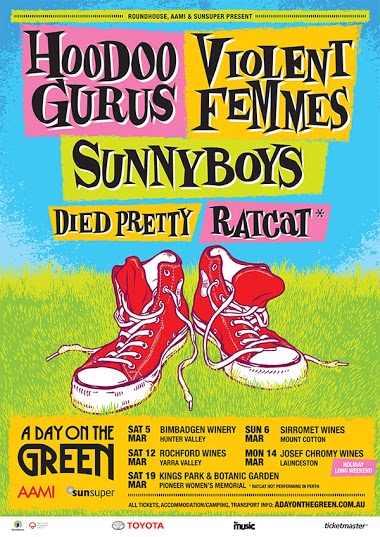