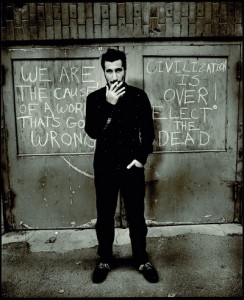 Roll up! Roll up! Rock ’n’ roll ringmaster Serj Tankian has donned his top hat and will be cracking the whip at some very special shows in Australia. With System Of A Down on hiatus, the frontman has gone solo with the multi-layered album Elect the Dead and nd his band the FCC.

Leeds, and along the way has been known to pull everything from ABBA to Dead Kennedys covers out from under his stylish top hat. TANKIAN calls his live show with band the FCC “part comedic and part heart-attack serious”. It’s vaudeville, it’s soapbox, it’s pomp, it’s theatrical, it’s political, and most of all, it’s utterly unique. And who better to introduce as Special Guests than the heavily conceptual Fantomas, a supergroup made up of vocalist Mike Patton (Faith No More), Buzz Osborne (The Melvins), bassist Trevor Dunn (Mr Bungle) and drummer Dave Lombardo (Slayer), whose music though rooted in heavy metal, touches on many different musical genres, and is laced with a crazily offbeat sense of humor. EVENT DATE: Wed 21 Jan – Tivoli, Brisbane Sat 24 Jan – Enmore Theatre, Sydney Serj Tankian