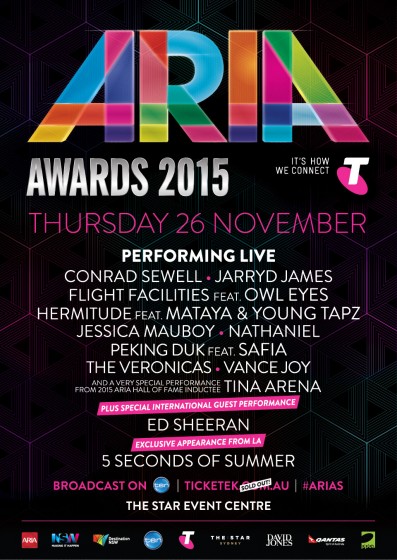 Music fans around the world can join the conversation around the #ARIAs and add a little Twitter colour to their Tweets while showing their support for their favourite Aussie acts by using the hashtag #ARIAs to generate a cute custom Twitter emoji version of the ARIA award itself.

The #ARIAs are the first Australian awards show to have a Twitter emoji created for it, and this is only the second time a Twitter emoji has been made for a music event in Australia. See all the backstage action and red carpet looks live on November 26 by following @ARIA_Official, @ChannelTen and #greataussiemusic.

Alli Simpson has been confirmed as the Telstra official Twitter Tweejay, hosting all the action from the Twitter GIF Booth on the Red Carpet Presented By David Jones. The Australian born beauty commands a social media audience of over 4 million followers. Most recently, Simpson has joined the team at Radio Disney to host her own radio show “The Alli Simpson Show” with over 20 million listeners a week. This past year, Alli has had some of industries biggest names on the show including Justin Bieber, Selena Gomez, Gigi Hadid, Gwen Stefani, Bella Thorne and many more. Alli Simpson appeared at the ARIAs in 2013 with her brother Cody Simpson.

The ARIAs is an occasion to honour great music and Telstra is bringing fans closer to the music they love by collaborating with a group of renowned Aussie Artists and fans to celebrate great Aussie music from the past, present and future with the #greataussiemusic series and behind the scenes action online at telstra.com/arias.

Tickets to the 2015 ARIA Awards Connected By Telstra have SOLD OUT, but fans can view all the action on the Red Carpet presented by David Jones from 2.00pm at The Star. Watch the Red Carpet special from 7.30pm exclusively on Channel Ten with the ‪#‎ARIAs‬ from 8.00pm on Thursday, November 26.